Effective Monday, July 6, 2020 all Town of Ancram Departments will be open to the public by appointment only. To set up an appointment at Town Hall, call 518‐329‐6512.  The Town Hall Reopening Plan and related documents are available immediately below and to the left of this notice, in the 2020 New Information section of the Home Page.

Tentative Assessment Roll for the Town of Ancram is completed
Date of Public Notice Event: April 23, 2021

Assessment Roll and Grievance Information Pursuant to Sections 506 and 526 of the Real Property Tax Law: Notice is hereby given that the Tentative Assessment Roll for the Town of Ancram is completed, and a copy thereof may be seen at the Ancram Town Hall 1416 County Route 7 Ancram NY 12502 by appoin …

Town of Ancram Public Notice – The Ancram Town Board has scheduled a public hearing on Local Law #1 of 2021, a proposed Local Law amending the Town of Ancram Zoning Law with regard to the Regulation of Solar Energy Generating Systems, on Thursday, March 18, 2021, at 6:30 p.m. via Zoom. Background ma …

The Town of Ancram is located in the southeastern section of Columbia County. The City of Hudson is approximately 20 miles to the northwest, the City of Albany approximately 50 miles to the northwest and the City and Town of Poughkeepsie approximately 35 miles to the southwest. The town was founded in 1803, and was originally part of Gallatin. In 1814 Ancram separated from Gallatin and became an independent Town. The name was derived from the Livingston homestead in Anchoram, Scotland. Robert Livingston, first Lord of the Manor was the son of a Scotch clergyman, born in Anchoram, Scotland in 1654. The town comprises 27,000 of the total 160,000 acres the Livingston family had held from the initial grant by the English Crown in 1686. Philip Livingston, grandson of Robert, founded the first iron works in 1743, the only one of its kind on the banks of the Roeliff Jansen Kill and in the NY Colony. There were four forges, a blast furnace and a refinery forge that employed 75 to 100 men at full operation. Three iron mines and a lead mine supported the iron works.
Read More >>

The Ancram Freeground Cemetery, sometimes referred to on maps and the internet as the Ancram Old Cemetery, was established at the very end of the 18th Century. Because the cemetery was created before the 1803 incorporation of the town of Ancram, there are no town records of its establishment but it is widely believed that the one acre plot that comprises the cemetery was donated by the Livingston family. The Livingston’s settled in the area in the late 17th century and received a royal charter land grant from King George I in 1715 for 250 square miles of land. Most of that land, known then as Livingston Manor, is now Columbia County. Read more > 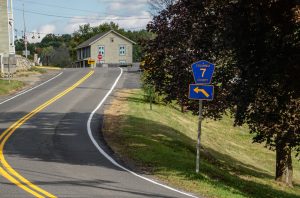