Ancram’s Comprehensive Plan was adopted by the Town Board in June 2010. Based on community input and citizen action, this strategic document describes both the ends and the means of achieving the Town’s vision of preserving its rural environment and character while developing a greater sense of openness and community. In other words, “keeping things the way they are, only better.”

To implement the Comprehensive Plan, the Town continues its planning and carries out its many projects through volunteer committees and councils, funded primarily by grants and donations. Click for more information on individual plans.

Ancram always welcomes long-time residents as well as newcomers who would like to get involved. Contact the Town Supervisor, Art Bassin, for more information. 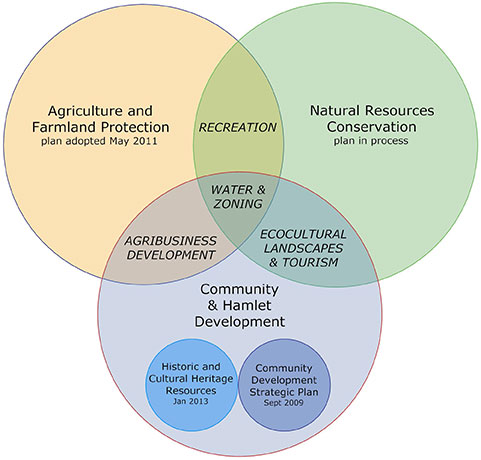 A Comprehensive Plan is the road map that guides a town’s decisions related to future growth and development. It is also a process that lets the current residents of Ancram define what they want the future of Ancram to look like, and how they want the Town to develop. It is the basis for the Town’s zoning, land use and subdivision laws, and will provide a framework for all town, county and state officials as they make decisions which will affect the town. A comprehensive plan deals with basic issues like growth and development, revitalizing our hamlets, maintaining open space, agriculture, the rural character of the Town, historic preservation, affordable housing, recreation and parks, traffic, road maintenance, natural resources, infrastructure, economic development and other topics of concern to residents.

The previous Ancram Development Plan was done in 1972, and has served the town well. But things have changed in the last 35 years. What made sense back in 1972 may not make sense today, and what the residents of Ancram thought was important and wanted in 1972 may not be what we think or want today. We already know that many townspeople today are interested in affordable housing for residents, protecting the Town’s agricultural economy, open spaces and rural character, and doing what is necessary to help revitalize the hamlets. The 1972 “Plan” and resulting land use and zoning laws do not adequately support these priorities, so doing a “new” comprehensive plan may be the only way to enable some of these interests to be addressed.

The Ancram Town Board appointed the Comprehensive Planning Committee in April, 2007. In May, the Committee prepared and issued a Request for Proposal (RFP) outlining the consulting support the Town needed to help develop the comprehensive plan. We received 8 proposals by the early June deadline, interviewed six consultants and selected Community Planning and Environmental Associates in July, 2007.

The planning process started in September and October 2007 with planning workshops attended by 130 town residents. The workshops were followed in December 2007 by a survey/ questionnaire which was sent to all residents and property owners to seek everyone’s opinions on important planning issues. 434 surveys were returned – a statistically significant 29% response rate. The Comp Plan Committee asked the NY Rural Water Association to conduct a groundwater protection study, which was completed in February 2008. In addition, the Committee compiled profile and inventory data on Ancram which describes the way things are in 2008. In April 2008, The Committee developed a draft Vision Statement which describes where the Community says it wants to be in 2030, and established a set of Goals to describe how we hope to achieve the 2030 Vision.  The Vision and Goals were reviewed and accepted by the Community at a meeting on April 26, 2008. Strategies, policies and programs to implement the Vision and Goals were completed by December 2008.  In February 2009, we held four Community workshops to review the strategies policies and programs, and held formal public hearings on the Draft Comp Plan in April and June 2009. The final draft of Comprehensive Plan was presented to the Ancram Town Board in July, 2009 for review and adoption. The Town Board held its public hearing on the Comp Plan in August, 2009.

The Ancram Town Board adopted the Comprehensive Plan on April 17, 2010.